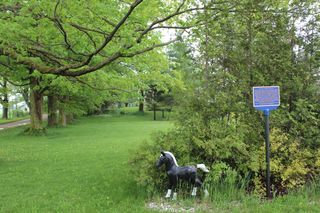 Reverend John Smithurst was ordained by the Church of England in 1839 and served as a missionary to the aboriginal peoples at the Red River settlements in Manitoba for twelve years. He settled in the Township of Minto in 1852 when he was appointed Rector of St. John's Anglican Church in Elora, Ontario. In 1856 he built a home on this property, called 'Lea Hurst' after his birthplace of Lea in Derbyshire, England. He was the first treasurer of record, a magistrate and a circuit clergyman. As a path master he was instrumental in the development of area roads and services and assisted settlers in the establishment of legal claims to land they had cleared. Rev. Smithurst died in 1866 and was buried in Elora. Rev. Smithurst's contributions to the Township were significant. The Smithurst Post Office, named in his honour, operated on this site from 1869 - 1887.

Erected by the Clifford & District Historical Society in 2007 with the assistance of the Ontario Heritage Trust.