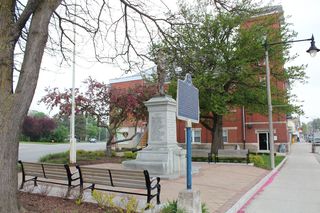 "The Founding of Harriston"

In 1854 Archibald Harrison (1818-77), a Toronto-area farmer, acquired land here in Minto Township where the Elora and Saugeen Road crossed the Maitland River. Mills built by Harrison's brothers, Joshua and George, formed the nucleus of a small settlement and in 1856 a post-office, Harriston, was established. The hamlet grew slowly, but from 1862 agricultural development stimulated local trade. By 1867, with a population of about 150, the village contained many businesses, including blacksmith shops and wagon works. The construction of Wellington, Grey and Bruce Railway, completed to Harriston in 1871, spurred the community's growth as a prosperous commercial and farm-implement manufacturing centre. Harriston was incorporated as a Village with about 500 inhabitants in 1872, and as a Town in 1878.