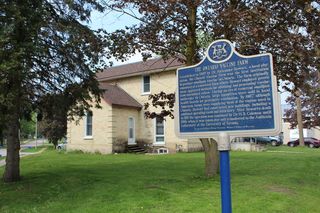 Established in 1885 by Dr. Alexander Stewart, a local physician, the Ontario Vaccine Farm was the first institution to produce smallpox vaccine in Ontario. The Farm originally consisted of a converted barn where Stewart employed government-approved methods for obtaining and processing vaccine from inoculated calves. During an era of recurrent smallpox outbreaks in Ontario, large quantities were sold to local health boards for preventative vaccination. By 1907, although American farms were supplying most of the vaccine used in Ontario, Stewart had constructed new buildings, including a combined operating-room and laboratory. After Stewart's death in 1911 the operation was continued by Dr. H.B. Coleman until 1916, when it was take over and transferred to the Antitoxin Laboratory of the University of Toronto.