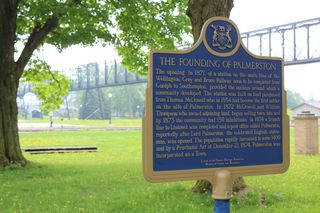 "The Founding of Palmerston"

The opening, in 1871, of a station on the main line of the Wellington, Grey and Bruce Railway, soon to be completed from Guelph to Southampton, provided the nucleus around which a community developed. The station was built on land purchased from Thomas McDowell who in 1854 had become the first settler on the site of Palmerston. In 1872 McDowell and William Thompson who owned adjoining land, began selling town lots and by 1873 the community had 150 inhabitants. In 1874 a branch line to Listowel was completed and a post office called Palmerston, reportedly after Lord Palmerston, the celebrated English statesman, was opened. The population rapidly increased to some 1400 and by a Provincial Act of December 21, 1874, Palmerston was incorporated as a Town.