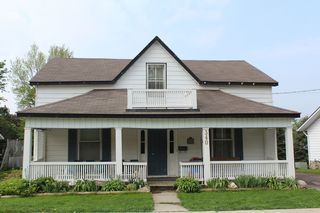 William Barnes came to Canada from Walsall, Staffordshire, England in the mid 1860s with his wife, Mary Ann, and two small children, Josiah and Esther. It is believed that they settled first in Fergus, moving on to Palmerston along with the railway. Four more children, Charles, Elizabeth, Jane and William, were born in Ontario.

At the time of their arrival in the new village that was springing up, William bought a lot on what was to become Prospect Street, but which was still to be surveyed. A family story tells how he had the house built with similar facades front and back, so wherever Prospect Street was to go his front door  was properly in place!

He was a man who loved music and was responsible for bringing the first piano to Palmerston, which, happily, is still being played in town to this day. Another family tale asserts that William drove the first train through from Palmerston to Harriston.

This family also became pillars of the Anglican Church in town, and the simple little wooden house on Prospect has withstood the changing times and styles as an example of the strength and solid values of this early Palmerston family.