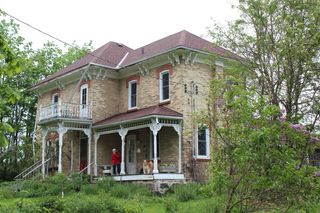 The crown deed for this property was sold to Robert Bell in 1862. He built a log house on the west side of the lot in 1855, when the Bells first settled here, which stood until 1896, when the present large two storey brick dwelling was constructed by George Whetham. Twenty eight acres on the south side, with the lake, was eventually severed from the farm. In 1870, Hugh Cargill, holder of Bell's mortgage, took over the ownership and sold to James Joseph Whetham the same year. In March of 1877, George W. Whetham purchased the farm. His son, Norman Whetham took over the property in 1920 and in 1957 sold it to Howard and Rilla Daly. They sold it to the present owners Harold and Milly Brown in 1973.