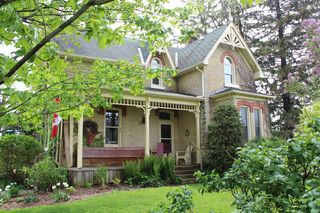 Alexander Gordon first purchased lot 23 conc. 13 of Minto in 1866. After a few years, Mr. Gordon purchased this lot and erected a beautiful brick home in 1874. There were two tenants living on this lot prior to that time in a log dwelling.

Prior to 1874, this property was the site of a typical pioneer log home. But in that year, Alexander Gordon built a fashionable Victorian dwelling with high peaks, arched windows, elaborate brickwork and decorated verandah. The property remained in the Gordon family until 1904 when it was purchased by Thomas Manderson and his wife Elizabeth (Cleghorn).

Archie was the son who continued farming the land, and he married June Rayson. Together they had four sons, Harvey, Lloyd, Cam and Brent.

Following the passing of Archie Manderson, the farm was sold to Jim and Susan Zaryski, two newcomers to Minto, in 1971. They raised a family of three: Tanya, Karl and Toban. In 1981, the two-story addition was built onto the back of the house, most of the work being done by the family themselves. The Zaryskis continue to enjoy living in this fine home, being only the third family to occupy the Alexander Gordon house in over 139 years.