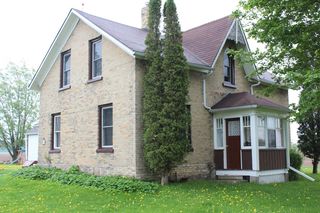 Thomas Grills, from Dumfries North, Waterloo Co. as shown on the 1871 Census, purchased this farm in 1874 from Joseph Kent. The Grills had an agreement to purchase, registered in 1873, and is shown on the Land Abstract in Jan 15, 1874 as purchasing the property. He took out a mortgage and built the house the same year. He was shown on the assessment roll as yeoman. In 1879 Stratford Railway purchased 3.5 acres and constructed the railway bed through the farm. The farm was split in 1891. An interesting note is that through a dairy herd and increasing a milk route demand from this farm operation, the Crystal Dairy in Harriston evolved in the early 1930s. This farm was known as the Hutchison Farm for 53 years.