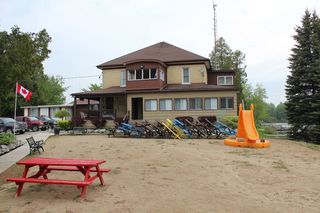 In 1871 the property passed from Thomas Chapman to William Reynolds. After being sold to Robert Grieves, a large house was built in 1894. His dream was to turn the lake property into a resort, which came true over the years. Extensive renovations took place following a fire in 1904, by owner Wm. "Black" Schwartsmeier. The re-modeled structure was now a hotel and soon became a hot spot for lodgers and vacationers. Over the years, Pike Lake Lodge has served as a hotel, restaurant, dance hall, general store and offices. Under the management of the Cowen's, the Lodge still serves its residents and vacationers staying at Pike Lake. The Cowen Family have developed and expanded the property into one of Ontario's premier resorts, offering a new Motel and 27 hole golf course, as well as permanent and seasonal trailer sites.

A note of history, in the 1880's a small steam powered passenger boat, the Blue Bell, sank during a storm, taking three lives.