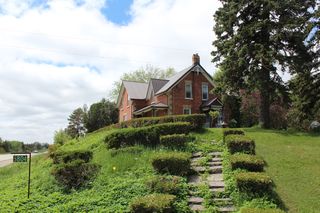 Joshua Harrison was born in 1817 and was the eldest son of William and Elizabeth Harrison. They had settled in York in Upper Canada, now Toronto. In the 1850s the Harrison family sent six of their children to purchase land in the Elora Land Sale. They became early pioneers in Minto Township in 1853. They visualized a town where the valuable Maitland River crossed the road, so they bought all the land in the area.

On January 28, 1841 Joshua married Sarah Shepard and they built a large log cabin, operating a mercantile out of the front, where the Royal Bank used to stand in downtown Harriston. Joshua Harrison bought property beside the Maitland River, on Lot 27, Concession 9. Joshua and Sarah had three daughters and one son, Thomas. Thomas married Margaret Maitland. In 1865, Thomas took over his father's farm and built a frame house on Lot 27, Concession 9. It mirrored the Home Farm in York, being similar in design and concept, with the original frame building centered around four rooms.

The original frame cabin was enlarged to house Thomas Harrison's 12 children. Using local bricks and timber from the farm, the elegant home was bricked in 1899 and enlarged to two storeys. The original four rooms served as the nucleus of the home. The soaring gothic gable echoed the home farm. The colours chosen for the brick also replicate the original.

Thomas and Margaret's sons Roy and Gordon operated the 400-acre Harriston farm. Gordon Harrison married Crystal Tilden. They had three children, of which, Peter, inherited the family farm. In 1960, Peter Harrison married Dorothy Toner and they still enjoy their place on Everhill farm.

All of the present branch of the Everhill Harrisons still remain within 20 minutes of home, connected to the estate of their ancestors. Joshua, their only son, his wife Caroline and their sons Aiden and Riley, live less than 200 ft. from their grandparents. Aiden and Riley Harrison are direct patriarchal descendants, representing seven generations of Harrisons on Lot 27, Concession 9 in Harriston.

Like the Maitland River that winds through their property, the Harrisons remain a significant element of the town of Harriston and their property has changed little since the ancestral Everhill farm came into their claim.