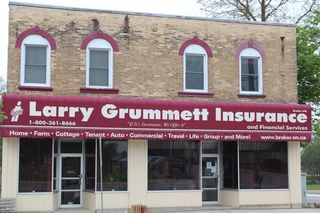 This lot has been split in two parts over the years. The west part on the corner being owned by Francis Brown and David Mollier in 1870. In 1871, John Hillhouse opened a general store adjoining the existing building.

The east part of the lot owned by George McDonald was already established and had operated a general store since 1863.

Former owners: Donald McEachern, Henry Eckenswiller, both having a general store for many years, then Ed Eckenswiller, the Awrys, the Mossbergs, 1938 Roy and Edna Bonham and later Max Held.