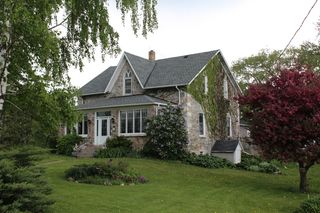 The first dwelling was a log home built in 1856, replaced by the present stone house in 1868. Originally, there was a cellar kitchen but it was also replaced by a stone addition at the rear of the house. Other owners were Mr. Cambell, Mr. Kidd, Conrad Schmidt, and Benjamin Kerwin, a drover who added the stone entrance pillars. His son-in-law William Penman added the sunroom. He was Reeve of Clifford for seven years. Then to Leslie Armstrong, then John and Elaine Barrie. Henry, another Reeve of Clifford, and Lucille Amonite were also owners.