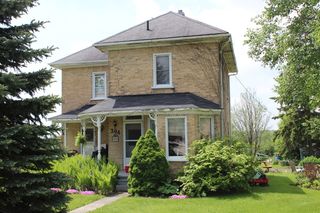 The crown deed was taken out on this farm by Malcolm Wright in 1864. Hugh Gordon purchased part of the farm in 1869, when he came from Quebec to settle here. He was a carpenter by trade and the house building opportunities were numerous in Harriston at that time. He lived in Harriston village and acquired a few lots on Webb St. on speculation until this home was built. At times Hugh helped another family member, a Wm. Gordon, Wagon Maker. He also was hired as a Foreman at R.G. Lambert Agricultural Works & Foundry in 1876. Later, Hugh was elected on Harriston Town Council. Lot 88 Conc. D was split over the years into smaller building lots and he built another house.
Former owners: 1877 Hugh Gordon, 1889 Tom Douglas, 1898 Rebecca Bready, 1903 Wm. Hinde, 1913 J.J. Pritchard, 1923 Milford Neil (Police Chief and Bailiff), 1954 Lyle Neil.