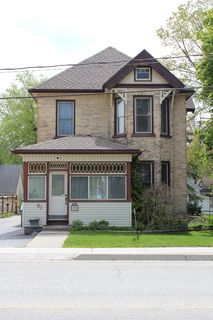 Brief History:
This lot sat from 1863 to 1877 in the hands of the Court of Chancery after Thomas Hartley's death, the first lot owner. In 1877 by vesting order it passed to James Aylward, farmer in Minto. The assessment records show a tenant, James Everson, a railroad worker who lived here in a frame house. The property was sold to George Fulton in 1891. George split the lot in 1904, the NW 1/2 sold to John Jackson and the SE 1/2 to James F. Hinde in 1908. Mr. Fulton built this brick house that year. He also built two other homes on this street. The frame dwelling was taken down during this period. James Hinde also associated in the cattle business with his father who owned parts of lots 89 and 88 Conc. D in Minto Twp. Hindson Burrows, who operated the International Harvester Co. dealership in Harriston, lived in this house.