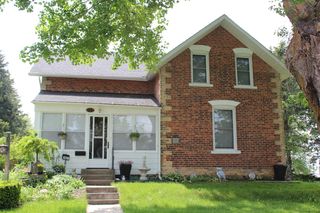 Samuel Robertson owned most of the lots in this area of Harriston.  He owned the Box Manufacturing Company on Mill St.  Mr. Robertson also leased a store On Elora St. S. from Alex McCready (Grant Deverall, Barclay office).  Robertson Street was named after Samuel Robertson.

Sylvester Teeple, a wagon maker, who came from Seaforth in 1873 had this brick house built.  The house had masonry work done to the corners and foundation in 1903 by Otto Williamson (etched in the brick).  The property stayed in Robertson's name until the mortgage was paid off in 1877.  The once used horse stable and possible workshop, at the back, still exists today.  John "Gus" Morrison, son of Murdock Morrison, operated a private radio station from here in the 1930's.  Not being licensed, it was shut down which upset a few of the locals.