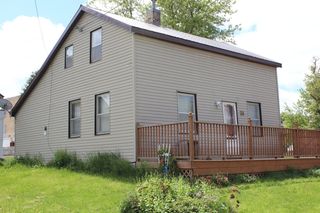 Built in 1869 by James Allan, proprietor of the Harriston Hotel.  The house was occupied by John Manning, who was the stable person employed by the Hotel.  He also worked for John Collison who bought the Hotel in 1872, later rebuilding and changing the name to the Collison House.  Part of the Hostler's job, besides caretaking of the horses, was to transport patrons to the Hotel to and from the railway station in the omnibus.  The horse stable at the back of the property burned in 2001.