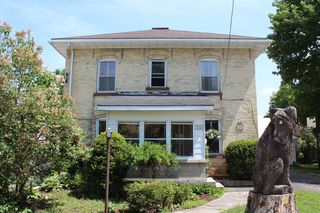 McDougall, a building contractor in Harriston, purchased this lot in 1872.  He split the property in 1874 and built a frame house which is the back part of the current residence.  In 1879 Mary and Dr. W.A. Harvey purchased the property, remodled and added the bricked front section in 1885.  Dr. Harvey's office was located in one of the Meiklejohn buildings on Elora St. S., now Acheson's Pharmacy.  The Harvey's were tenants on the second level until this house was built.