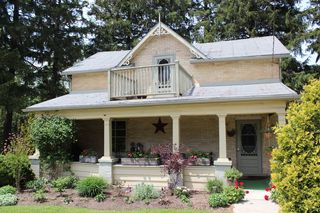 This house was built by former Mayor James Wilson for his son, James W. Wilson. In later years, Harriston was proud to have Duncan Sinclair MP reside here and be part of the community. Mr. Sinclair was raised in Minto Twp. on Lot 5 Conc. 6. He worked and later operated the Minto & Arthur Cheese & Butter Manufacturing Co. Ltd. In 1906 he moved to Arthur, later returning to Harriston in 1920 until his passing in 1951. He was employed by International Harvester during these years. During his career as a politician and settling in as an MP, he ranked as one of the most popular and highly esteemed members on both sides of the House. He served as Councillor, Reeve, Mayor of Harriston, County Warden, Federal MP and headed many associations. Mr. Sinclair's success was due to his dedication to serving his constituents, especially the seniors.