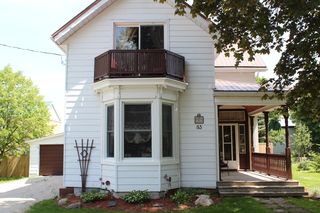 Richard Dowling was born in Blessington, County Wicklow, Ireland, on November 30, 1840.  He came to Canada with his family in 1853 when he was thirteen years old and lived first in Hamilton, ON.

In 1866 he served for some months in the 33rd Battalion Seaforth Volunteers to fight against Fenian attacks from the US.

That same year he married Elizabeth Scott in Seaforth and they eventually has three children, two of whom died very young.  One daughter, Margaret, grew to adulthood and married James Lee Rutherford in Chicago where she lived the remainder of her life.  Richard's wife, Elizabeth, died in 1873 after the birth of their third child, and she is buried in Harriston, Cemetery.

Richard, who was a carpenter by trade, had opened a planing mill in Harriston about 1869 and this later developed into the Harriston Furniture Co.  In this, he had a partner, George Leighton.  At one time the furniture factory was the town's largest employer and it had customers in several provinces.

In 1874 Richard married Annie Robertson and they had six children; Mary (1875), Richard Harvey (1877), John James Robertson (1879), Thomas Edward (1881), Frederick Ferris (1884) and George West (1888).  All grew up in Harriston and participated fully in town life.  The boys played hockey, baseball, and football.  Richard helped to manage the town hockey team and played cricket himself.

He was elected Mayor of Harriston in 1889 and again in 1890.   He belonged to the Masonic Order, A,F,&A.M. Lodge 262, and was a charter member of the Canadian Order of Foresters Harriston Court no. 34.

in 1909, at the age of 69, he and his wife left Harriston, going first to St. Louis where two of his older sons were living.  The following year they moved to Vancouver and lived there until Richard died in 1916, Annie in 1941.