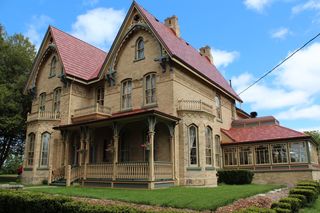 This Harriston landmark was built by Alexander Meiklejohn in 1877. He came to Harriston in 1862 and constructed a store with a small apartment on Lot 21 Elora St. S. now Acheson Pharmacy. Mr. Meiklejohn was a successful dry goods merchant on Elora St. and later entered the hardware business erecting a large building on Lot 26/27 Elora St. N.

Alexander was the first Reeve of Harriston in 1873 and first Mayor in 1878. He and his wife Elizabeth had no children but raised two nephews of his widowed sister, James and Alex Moore. In 1876, John Meiklejohn came out from Scotland at the request of his uncle to join him in the hardware business.

Nothing definite is know about the builders, but, they may have been from the Guelph area. There is a house almost identical in Mount Forest. The Meiklejohn Estate grounds extended from the Clyne farm to George St. taking up more than half a block. A large apple orchard occupied the south half of the grounds and above this was an area that produced a root crop and hay. Here also were plum, cherry and pear trees. Along walkways closer to the house were bushes of red, white and black currents, raspberries and kitchen vegetables.

A small barn housed a carriage, horse-stall and a cow stable. Above was a hayloft and docecote for pigeons. The hen house was attached. A drive shed and small pig pen were separate. On the north side of the house a large fenced-in yard providing pasture for the cow and years later a much used baseball field. A small bowling green completed the grounds although many years later a tennis court was built.