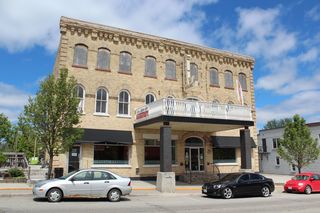 The Collison's come to Harriston in 1873 and operated the Harriston Hotel on the same site until 1876 when they built the "Collison House".  The name changed in 1952 to the Coronation Hotel to mark the crowning of Queen Elizabeth the Second.  The balcony overlooking the main entrance served the local brass band who would play on special occasions for the enjoyment of the townspeople.  The dining room was renowned for its fine food and service.  Hotel guests also enjoyed the hospitality provided by the Collison's.