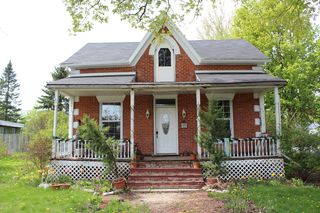 After the CPR came to Harrison, Richard Symonds a yard employee, built this red brick dwelling in 1876.  He didn't officially own the property until 1877 when a mortgage was registered.  He split the lot in 1879 and sold the south half to George A. Stone.  Past owners include James Richardson, James Clarke, John Baggs, Thomas Buttimer, Isobel McLean, Robisene Richardson, MArtha Geberdt, Mr. Thompson, Ernie Dennis, Mr. Self, and Hugh Clunas.  The bricklayer's initials are etched in the brick.