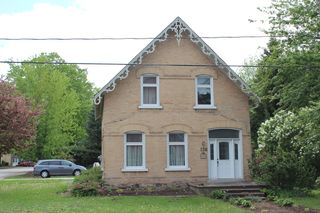 Built in 1875 by William Gordon, cheesemaker, who had purchased the lot in 1864 from John Webb.  He worked at the cheese factory situated on the lot behind the former Petro Canada station owned by Harriston Motors.  Then sold to Dr. Joseph Allan, MC.  He used the back part of the house for this office.  Jack Ward, who had his barbershop where South Street Cafe is now located on Elora St S., lived here for over 50 years.