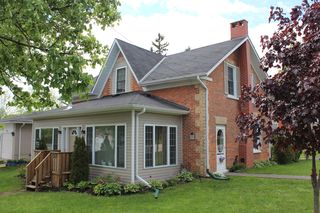 Built by Harriston's pioneer doctor, Dr. James Cowan, who practiced here from 1868 to 1890 from this house before moving to Manitoba. Thought to be the first brick home in town. His son, Dr. Samuel Cowan, also doctored here from 1875 to 1903. As reported in the Elora "Lightening Express" in 1875, Dr. Samuel saved the life of Harriston Reeve and merchant Alexander Meiklejohn, curing a serious illness.