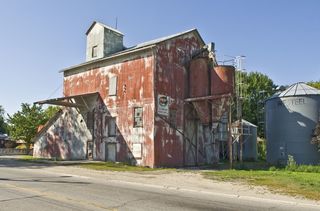 "The earliest record available, of this mill, is from the County of Wellington Gazetteer and directory of 1879-80, published by Armstrong and Delion, Elmira, Ontario. Among the six industries operating in Clifford at that time, was listed: -- 'Grist Mill, by J. E. Boomer; good frame building; 4 storey high; capacity of turning out 66 barrels (flour) per day; employs 3 men.' The population of the village was then 900.

"In the early days, flour was brought by wagon or sleigh from the Mount Forest Mill, or from the 'Red Mill' between Mildmay and Walkerton. For many years the Frank Rennie Livery transported these loads of flour from the Red Mill for Mrs. Dolmage who carried on a small, but thriving, business in flour, feed and bread. She also had a ONE cent candy counter where we climbed on an unpainted wooden chair to make our momentous choice.

"The grist mill was built in the year 1867 partly by public subscription, and it was a red-letter day for Clifford when the new Confederation of Canada came into being, the men of Clifford celebrated Canada's birthday, July 1, 1867, by holding a 'bee' and putting the rafters on the new mill.

"It was operated for some years by Mr. J. E. Boomer, then sold to J. H. Hazlewood, of Wroxeter, whose wife was Margaret Eaton. His sons, R. Mills Hazlewood, married to Helen Hawke, of Grimsby, and Ira, married to Cora Powers, of Clifford, ran the mill until the tragic death of Ira at an early age, and until R. M. retired. Since then it has been owned by Harold Smith, William Jacques, and J. T. Maguire, who owned and operated it for about 40 years, then sold and retired. The next owner, Oliver Smith, of Atwood, shortly sold to the present owner, Hartley McHarg, of Listowel.

"The mill was first run by water power from the Red River, know as Coon Creek; then a steam engine was installed fed by wood, then coal, then oil. Mr. Oliver Smith installed a diesel oil burner. At this time, in 1962, he removed the tall smoke stack, about 90 feet high, which had been a striking land mark at the south entry of the village.

"John Lee was the first engineer; James Hamilton was flour miller; John Moose was chopper; John Grieves was teamster, and the lovely team of grey Belgians were a feature of the mill. John Milligan followed Mr. Grieves as teamster, for many years. Joseph Horton was engineer for years. Other employees were Herbert Ariss, Archie Holtom, Chester Cook, and Melvin Milligan who is still on the staff.

"The mill ceased milling flour many years ago, but it still serves a wide country district in grist and feed. Mr. Maguire gave it a veneer of grey metal siding, but otherwise there has been no change from the original building of 100 years ago."