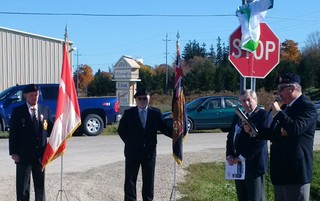 September 21, 1915, Private Francis Russell Reid Lambier #126960 (Better known as Frank or "Tack") left his job as a printer, and travelled to London to begin his training for the Great War. Many from Palmerston did the same those later months of 1915 when 23 enlisted. Only 12 would return home.

After enlisting Frank excelled in training and was promoted to Lance Corporal March 10th, 1916 while stationed in Guelph. Early April he sailed from Halifax to Liverpool, England on the H.M.T. Olympic (sister ship of Titanic) where upon arrival he was assigned to further training in a reserve battalion. May 27th, Lambier was attached to the 73rd Battalion of the Canadian Expeditionary Force, part of the famous Royal Highlanders of Montreal. While training Frank returned to his preferred rank of private in what seems to have resulted from a disagreement with another non-commissioned officer.

August 11th, 1916 Frank left England and headed to France with the 73rd to the front lines after only three days rest. Their first taste of action came August 17th when they were shelled while scouting near Ypres. Within 2 days of starting out for the front the 73rd Battalion had already lost 3 Officers and 8 men, while 20 were wounded. The unit moved on to the Somme in October before being deployed December 23rd to occupy the lines at Arras.

Fighting was steady into the New Year of 1916 when on February 1st, Frank along with 100 other men of A and D Companies were moved back from the lines to begin practise as raiding parties.

He excelled at this raiding action and it proved to be one of his shining successes. The dispatch (see below) was sent recognizing his “conspicuous gallantry and determination during a successful daylight raid near Souchez, Feb; 4th 1917.”

For his action Frank received the Military Medal given for individual acts of bravery and devotion under fire.

During his recovery Frank went to a Non-Commissioned Officer training course and was again promoted to Lance Corporal April 7th, 1917 and rejoined the 73rd. On April 9th, 1917, Lance Corporal Lambier took part in the attack on Hill 145, the highest point and most heavily fortified position along Vimy Ridge. Today the Vimy Memorial stands on the very spot Lambier and the 73rd struggled to such a victory.

Despite their continued success to this point the 73rd was disbanded and dispersed amongst the remaining Royal Highlanders Battalions with Frank transferred to the 42nd Battalion. At his own request in August of 1917, Frank demoted himself back to Private. At Arras the 42nd was tasked with attacking and capturing a maze of trenches at Monchy Le Preux. The dispatch noted Pte. Lambier “be awarded for conspicuous bravery at the front - that of rescuing a wounded comrade under the deadly fire of the enemy's batteries. In the stress of battle, with the enemy's batteries booming and death lurking everywhere, Pte. Lambier rose to the true greatness of his heroic resolve to bring relief and assistance to a wounded soldier in the peril of his own life. His magnificent display of tenacity and courage at a critical moment has written the word "Hero" in letter of fire.” For his acts on that day, Pte. Lambier was awarded a bar to his Military Medal. Only 848 other Canadians have ever achieved such reward.

In recounting Frank Lambier’s story, Chad Martin notes Frank “showed how a small town boy raised with a hard work ethic could have the determination to get the job done, and help his fellow man no matter what the odds. There truly is no possible argument against why he was honoured with having the Royal Canadian Legion in Palmerston named the Frank Lambier Legion. Francis "Tack" Lambier holds every right to be considered a Canadian hero, and we hold every right to consider him a great part of our community; not because he fought in a Great War, but because of what he did within that Great War.”

Today the Town of Minto, in support of the Lambier family dedicate this roadway in Minto as Frank Lambier Court along with the emblem of the poppy in recognition of his service in the Great War.

The preceding was summarized from Chad Martin's full history at http://www.noonegoes.com/francis-rr-lambier.html